Finally we arrived safely back home from Pichlingersee Regatta 2017. I hadn’t got time to write in the blog last morning because races started 1 hour earlier than the previous days. In the F5-M Euro Cup stage we had great wind on Saturday morning, almost top A rig conditions, so the organizers were able to make 5 rounds (race for A and B group) in these great conditions. After that the wind stopped, and there was just one more round in breeze. On Sunday we started in slow wind, but it became stronger, so both days were great for racing.

On the first day in stronger wind conditions I know that I had to push as hard as possible because I may had some advantage against swing rig boats. I pay attention well and I won 5 of 6 races and made one second place. For the next day I have to just pay attention to Ivan Ermakov on the second place and Pavel Novotny on the third to manage the gap between us on the less risky way. I got some weed that day too but everything went well and finally I won F5-M. Pavel finished second and Ivan third, but there was some amazing races between them. Congratulations to them, it was great to see their performance!

The performance of the other Hungarian RCsailors:

Sometimes they struggled with set up problems, and Miklós has lots of technical issues, but I think it was a big step to compete at Pichlingersee for the World Championship preparation for both of us.

If I look back on the whole week, it was great to test all the boat I would like to use at the Worlds, and mentally this good performance makes me confident after some bad moments with set up problems and poor performance of my own Ten Rater. Finally at Pichlingersee it seems most of the problems gone.

The organizers made a great job, a big thank you for them for the Regatta! I hope we will compete there next year too. 😊

The F5-E is also finished at Pichlingersee Regatta. The wind conditions were really great, we also have to use the A and the B rigs both days. Second day there was a little rain but luckily not so much.

Finally Pavel Novotny won the F5-E competition with an outstanding performance. After the first day both of us were on the lead. Yesterday the beginning of day he won the first race in front of us, so I fall back to second. After two rounds I reached the lead again, but at the 9th race I made a big mistake, and in the last one I collected some weed from the lake. Pavel didn’t make any mistake in these races, so finally he won the whole competition. I think he is one of the favorites for the NAVIGA World Championship.

Jens Amenda and Max Lehman were also really strong, but Amenda hasn’t got a B rig, so he losed so much in bigger wind conditions. Max collected lots of weed, so the luck wasn’t on his side this time. The surprise was Országh Tibor from Hungary who reached the third place. I was really happy about it, that he made so great performance here. He get to the third place just after the last race. So when me and him went to the score board to watch the final standings, he would like to ask the judge why he isn’t in the list. I said him look upper, and upper on the list. 😃 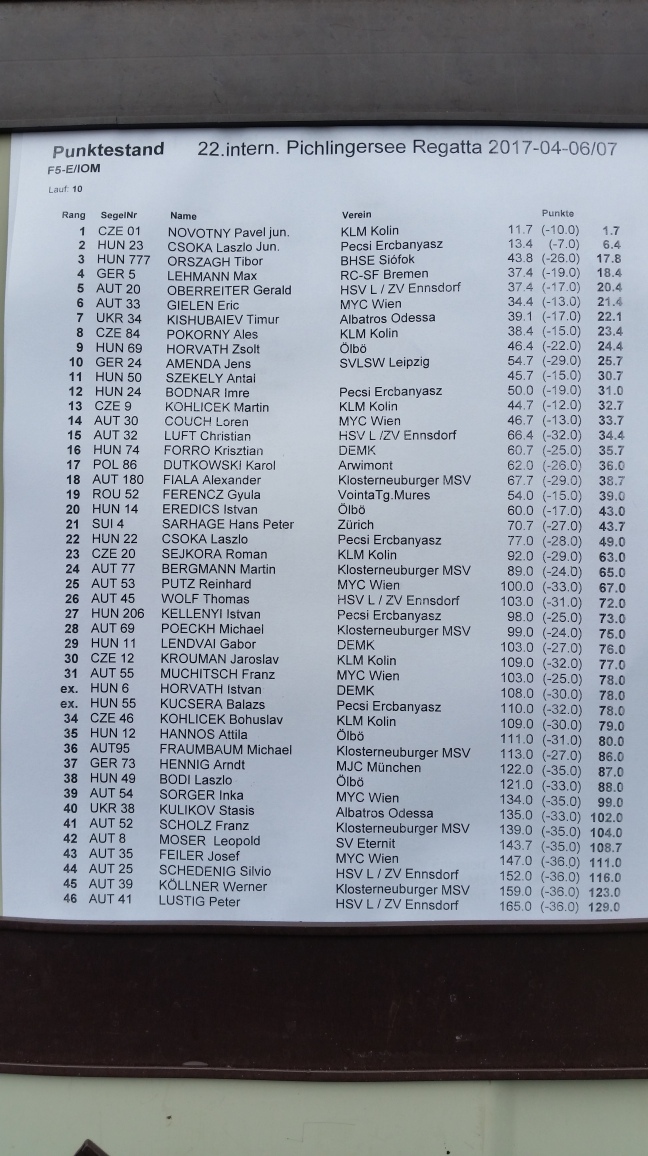 Today will be the race of the F5-M Euro Cup and it seems we will have great wind again. 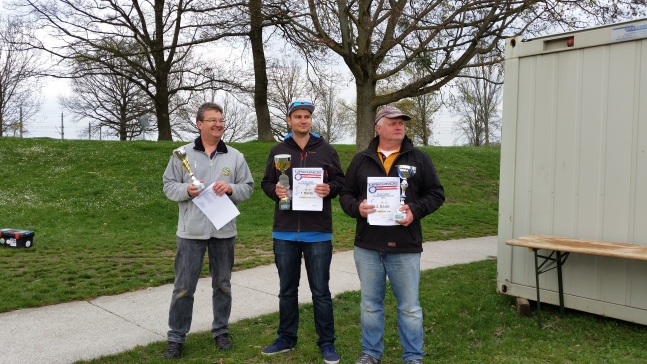 Finally the wind arrived for the second day of the F5-10 at Pichlingersee Regatta. We started in breeze but after that it became stronger (we just used A rig, and wasn’t the boarders of it 😃), so the organizers could make 14 races. I think we had a great day.

For me it was awesome, I reached finally the first place of the F5-10. Previously I afraid that if the wind come I will struggle with the sail which is optimised for the new 0.8 waterline NAVIGA rule, but with I right set up everything went well and it was insanely fast. I should say that in bigger gusts it became slower, and the original sail would be better. My father finished finally 7th and Országh Tibor finally 9th in the F5-10.

Today we will have the first day of the F5-E. Much more wind predicted than yesterday, so we will have a lot of fun. Maybe we should use B or C rigs. I’m really excited what will happen. There are 44 competitors on the entry list, so it will be a strong competition with really good RC sailors. 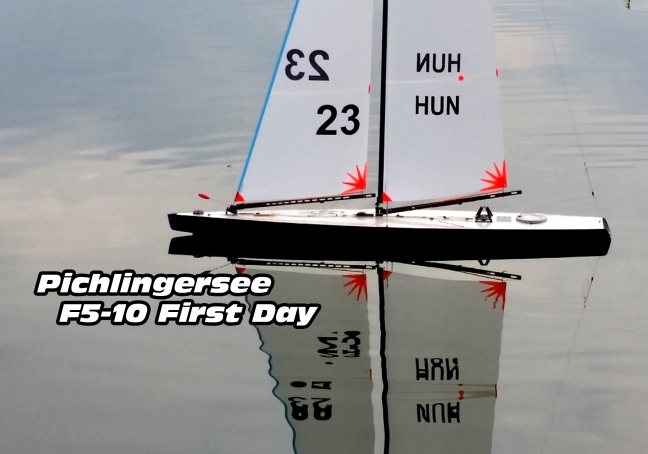 The first day of the F5-10 wasn’t so windy. 😀 Until lunchbreak we hadn’t got races, but after that some breeze came and it was able for the organizers to make 2 races. In my mind for these conditions the two most important factors were boat speed management and strategy.

First we had to pay attention for the wind shifts to react on them, but really slowly with the rudder. It was better to trim the sail first to follow the shifts (I mean to go on the same direction when the shift comes, just react on it with sheet out or in the sail) if it was possible. This way it was possible to avoid losing much from the speed, which is more critical in the Ten Rater in these conditions than in other classes I compete. Or maybe it is just with the Walicki Ten Rater, but I realized that rudder movements causes so much speed loss, much more than I expected. The strategy was also really important yesterday. The wind shifted all the time and if you weren’t on the right side in the refreshing breeze than it meant the half of the fleet would overtake you.

I like these conditions, so it wasn’t a bad day for me. I forgot to take photo of the intermediate results, but I lead the race. Also my father is around the 2nd and 3rd place. Yesterday Országh Tibor wasn’t so lucky, he suffered from set up problems, but finally he solved the issue, so he could be better today. He is in the middle of the fleet now.

Today more wind predicted, maybe we will have lots of races today. I hope so. 🙂 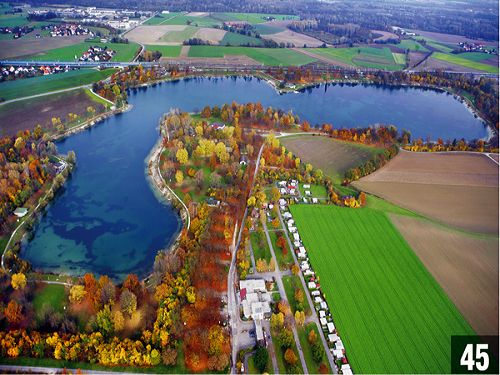 Pichlingersee Regatta is simply awesome. A whole week RC Sailing racing in the northern part of Austria in several classes, one of my favorite competitions. Yesterday was the racing days for Dragon Force 65 and for Mini 40, and also the day for travel to me and my father. We arrived safely after some hail on the highway, I hope we will have better weather in the next 6 days.

From the part of the Hungarians we will compete in F5-10, F5-E, and of course F5-M which is the part of the Euro Cup. Today and tomorrow we will race in F5-10 (Ten Rater), which will be really exciting because I think some of the guys will test those boats what they want to use at the NAVIGA World Championship next month. Of course I would also like to test my Ten Rater, I just have a few competitions with it what wasn’t enough practice for the Worlds, but I’m lucky that I can compete here against really strong RC Sailors.

We will see what happens. I will try to provide fresh information from the regatta on my Facebook page (Csóka Sails) and also here on the blog.